The Nephilim - Heroes of Old 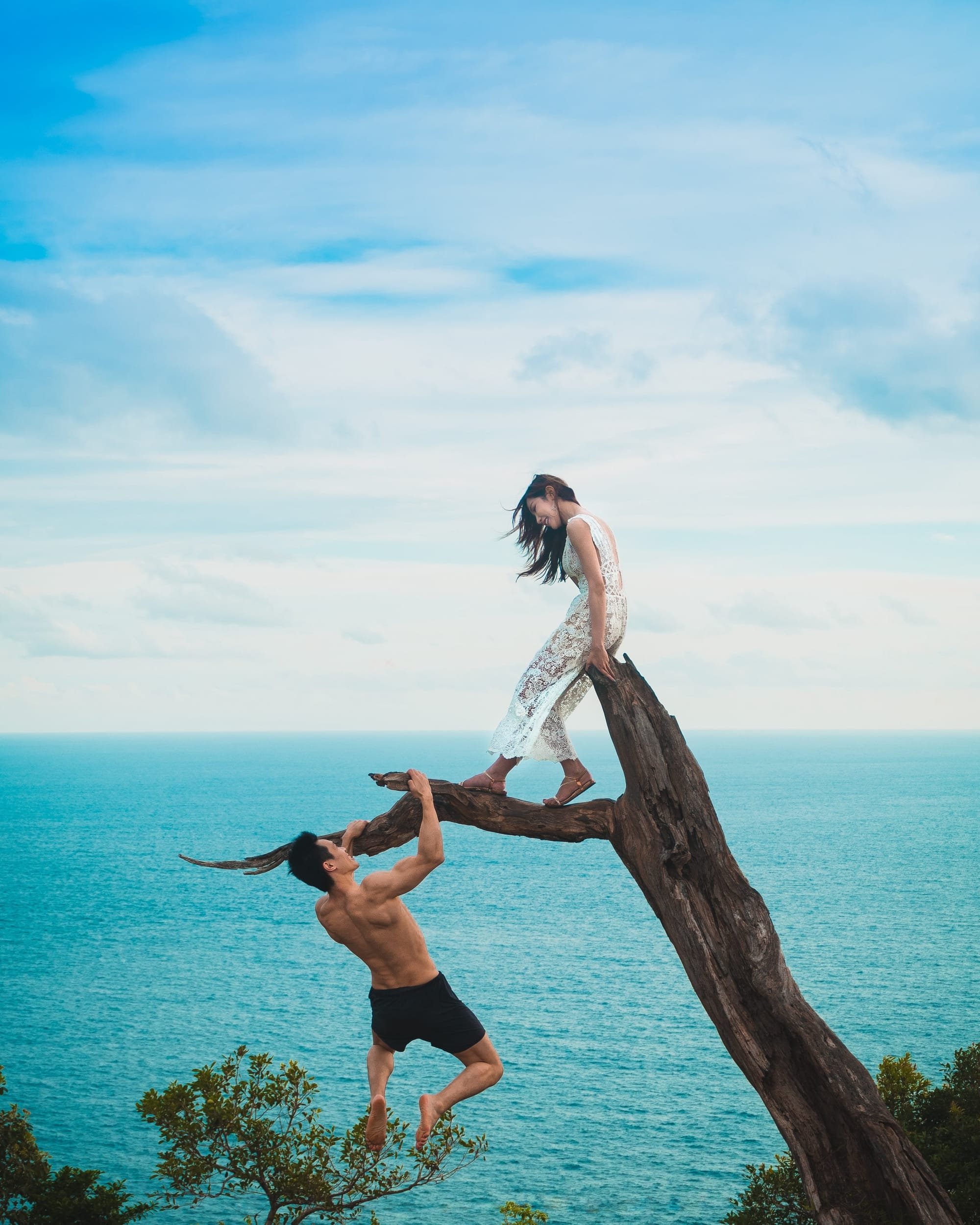 Question: Is there a parallel between the Nephilim in the Bible and the giants in Greek mythology?

Answer: We can trace the story through and see where it leads.

The Bible lets us know that angels can be seraphim (Isa 6:2) or cherubim (Gen 3:24). People also talk of ophanim, which they identify with the beings Ezekiel saw, or the “thrones” Paul talks about in Colossians 1:16. The singular of “seraphim” is “seraph” and “cherub” is singular for “cherubim.”

But certainly, according to the Bible God has created other beings of which we only know a little. The Bible tells us that angels have been on earth at various times for various reasons. They can appear as men, not human men, but men in as much as they have a material body.

And in the early days of human civilization, angelic beings helped humankind as Deuteronomy 32:7–8 (Septuagint) points out: “When the Most High divided the nations, when he separated the sons of Adam, he set the bounds of the nations according to the number of the angels of God.” (The Masoretic text differs on this reading, but the Septuagint and Dead Sea Scrolls have the earlier reading.)

This allows us to see that angels helped in the early days of human civilization: they had a particular commission to watch over Adam’s offspring, but it was the Lord himself who kept his eye on the seed that was contained within the family of Jacob. "His people Jacob became the portion of the Lord, Israel was the line of his inheritance" (Deut 32:9).

Angels looked after Adam’s dispersing family members. (What the book of Enoch calls "The Watchers".) Some of the angels fell from the purity in which they were created. Men also fell, and some men worshipped angels. So the angelic beings were thought of as elohim too, which is where false gods come into play.

Angels looking after cities also fits in well with the ancient Sumerian religious texts, explaining that gods and humans lived together on earth. Each city in the fledgling city-states of southern Mesopotamia was thought to have its own god.

We know that after Adam and Eve’s exit from the garden cherubim are placed on the east side of the garden together with the flaming sword "to guard the way to the tree of life" (Gen 3:24).

Some time elapses and then Genesis 6:4 relates that “The Nephilim were on the earth in those days.” The Nephilim were not the angels, but if we look at the name “Nephilim” it may yield some information: the Hebrew word nephesh is soul, we all have it, the animals too, it means life. Elohim, cherubim, seraphim, are spiritual beings while Nephilim are a mixture of biological life and spirit life, they were offspring of a liaison between angels and women from Adam’s line.

“The angels which kept not their first estate, but left their own habitation” (Jude 1:6).

Some of the angels did not rise to their task and instead married some of the daughters of Adam. The daughters of Adam’s offspring would live long, so an angel wishing to make his home on earth would have a mate for 900 or so years—a better prospect than a wife who would live for only 70 or 80 years. Plus the females of Adam’s posterity had the added attraction that they were fair. “The sons of God saw that the daughters of humans (adam) were beautiful” (Gen 6:2). And the result of the angels forsaking their commission to look after the branches of Adam’s line meant many of Adam’s extended family members followed in the footsteps of their father Cain, and went badly astray.

“Then the Lord saw that the wickedness of man (Adam’s line) was great on the earth, and that every intent of the thoughts of his heart was only evil continually” (Gen 6:5).

The Flood was sent to restore order, which in the main it did, although there was still some work to do in eradicating the disturbance to the human genome by the angels’ DNA entering the gene pool.

At different times in the history of the world beings of whom we have little knowledge could have been on the earth. We make a mistake presuming that life on earth has always been as it is now. We do not know what relationship God had with the Neanderthal man. Perhaps such knowledge is not for us to know.

Hesiod the Greek poet (750 or 650 BC approx.) spoke of a golden race in earth’s primeval history. People of the golden race were followed by a silver race and later a bronze race of people who put the metal bronze to work, making armour for themselves.

There was, according to Hesiod, also a race of heroes—a god-like race of men who were considered some sort of heroes and labelled as demi-gods.

They were the heroes of old, men of renown. The NIV (Gen 6:4) labels the Nephilim “heroes of old.” Hesiod may not have had the precision that the Bible has regarding these primeval days of civilization but we have to say Hesiod does seem to relate to the point Moses is making when he put together the early chapters of Genesis. Moses writes “heroes of old” because he is making a point of contact between his readers and his narrative. Moses presumes his readers will be familiar with these “heroes” and “men of renown” because they do, after all, have some “renown.”

Moses explains to us that these Nephilim are the offspring of sons of God and human women, Hesiod’s demi-gods are offspring of gods and mortals.

There does seem to be a parallel between what Moses writes and what the Greeks write.

God needed to remove Adam’s children that had gone wild, who had misused the privilege of long-life and physical beauty - including the offspring of liaisons with angels who at various points came into space-time with a material body and saw the women from Adam’s family. As we have said, these were not like regular women, they had a special beauty and strength. They would make ideal mates for angels. If the angels could start to spread their own DNA that hadn’t been created in the same way humans had, then they could father some offspring on the earth themselves.

This would fit very nicely into the serpent’s plans too. We don’t know how many pure daughters of Adam’s line were around, but judging by the length of time it took each of the fathers to actually father a child, then there probably wasn’t a large number.

Then the Lord said, “My Spirit shall not strive with man forever, because he also is flesh; nevertheless his days shall be one hundred and twenty years” (Gen 6:3).

God needed to remind Adam’s offspring that they too were flesh, just like the surrounding people: the Ubaid, Sumerian, and Akkadian populations who lived regular lifespans.

Noah seems to have married a woman with a regular lifespan or mixed lifespan parentage, because from Noah’s children onwards the lifespans decreased. Sarah still contained some of the life-phase elongation, which is why we see her good looks maintained in her older years; though she was over 60 she could still attract the attention of both Pharaoh and Abimilech.

But by the time we get to King David the lifespan is 70 years.

Genesis 6:2 says that the sons of God took whomever they chose. That sounds to me like they took as many female offspring of Adam as they wanted. The literal translation of this verse is, “And the sons of the Elohim saw the daughters of the adam that they were good (beautiful); and they took to them wives whomsoever they chose.”

If the serpent could take all the women in Adam’s line and impregnate them with flesh other than human flesh then the promised seed (the seed of the woman that would crush the serpent’s head) would not see the light of day. And this could also be the reason why Noah didn't have children until he was 500 years old, (a long time to wait even for the long-living line). The women from Adam's line, it seems, had all but been taken, so mixed parentage or regular life-span women were all that was left. Hence the gradual decrease in life-spans after that point.

Mythology has stories relating to giants, or gigantes as they are called in Greek myths. Genesis tells us they were “men of renown,” hence the myths about them.

So something had to be done and the Flood was the answer. The “seed” would survive, which was important for the salvation of the world.

The Flood was mainly to free the earth of Adam’s descendants, because they had gone seriously bad. Every thought and inclination of their hearts was evil all the time. Secondly, the hybrid Nephilim could also be largely destroyed. But not all of them would be wiped out as Genesis 6:4 explains that some of them were around after the Flood too. But God sent the Israelites to track them down and one of the last of them to go was named Goliath who was killed by a boy named David.

Where these departed spirits went we cannot be sure but Peter makes us aware that “God did not spare the angels having sinned, but having cast them down to Tartarus” (2 Pet 2:4).

In Greek mythology the Titans are children of Uranus (representing heaven) and Gaea (representing earth). The Titans rebelled and ended up being imprisoned in Tartarus.

We read in the 1st and 2nd chapters of the book of Job of what could be an annual meeting of angels where each angel had a chance to report how events were going with their particular city-state: “on the day when God’s sons came to present themselves before Yahweh” (Job 1:6).

Job was from the “east,” which can refer to southern Mesopotamia, similar to when “the Lord God had planted a garden in the east.” Or when  Abraham is mentioned as originally being “one from the east” in Isaiah 41:2. A few verses later the Lord refers to Abraham as “my friend.”

Abraham’s friendship with Yahweh began in the city of Ur. Job lived in Uz, we don’t know exactly where Uz was located, but neither do we know where Akkad was located and yet we know it was an important city in Mesopotamia. According to the Dead Sea document, The War Scroll, the land of Uz is mentioned as existing somewhere beyond the Euphrates, which of course is Mesopotamia.

The information we have in the Bible lends itself to the possibility that when the angels came to present themselves before Yahweh (in the book of Job), the event happened on earth and not in heaven as some have supposed. If the meeting took place in heaven we are left wondering which human was also in heaven to record the event and write it down in the book of Job. But if these assemblies of the “sons of God” before Yahweh took place on earth, a man could have witnessed the meeting and took the minutes, so to speak. The local population could have known about these “meetings,” some of whom may have been invited guests and able to record the proceedings. The angels would need to give an account of how their “watching” over their respective branches of Adam’s family were going.

We begin to see a picture emerging as we consider all these Scriptures along with the stories told elsewhere. But we have to agree with Paul who said, "For now we see through a glass, darkly; but then face to face: now I know in part; but then shall I know even as also I am known" (1 Cor 13:12).

Nephilim
Was The Garden of Eden Story a Parable?
Did Moses Write Genesis?
Is Genesis A Fairy Story?