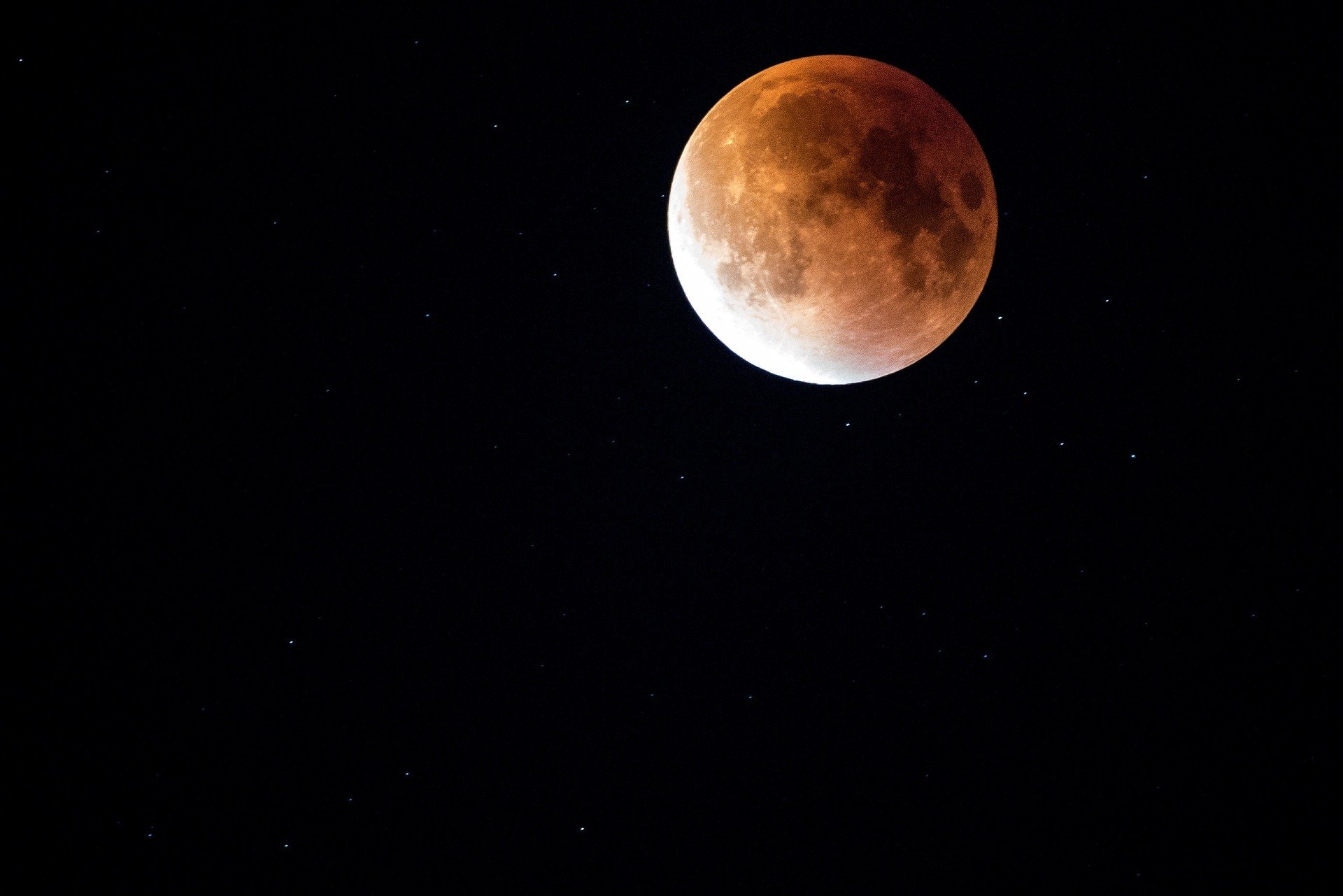 Question: Where does the seven day week come from? “Then God said, 'Let there be lights in the expanse of the heavens to separate the day from the night, and let them be for signs and for seasons and for days and years'” (Gen 1:14). I understand that we have the moon to mark months, the sun to count off days and the stars help with a year, but nothing for the week?

Answer: Yes, the Lord has given us three independent timekeepers in the sky - the sun works well for days. (Solar years are a little more tricky, a solar year is 365.242 days long, hence the extra day each leap year.)

Secondly, the moon marks months, (we can see the words "moon" and "month" are related). These days many countries have Gregorian calendar months rather than lunar months. In the Bible lunar months marked the start of the year and Passover etc. - "This month (Abib) is to be for you the first month, the first month of your year" (Exod 12:2). The exodus occurred in the first month: "On this day you are going out, in the month Abib" (Exod 13:4).

The month of Abib occurs when the new moon appears that is nearest to the spring equinox. The Israelites were in Egypt at the time and needed a solid datum line from which to fix their counting - "Tell the whole community of Israel that on the tenth day of this month each man is to take a lamb" (Exod 12:2). God had placed lights in the sky for "signs and seasons."

The name Abib was related to the ripeness of the barley crop, when the crop was in ear and the new moon appeared it was said to be the season of spring. That was the beginning of the month of Abib. Abib can be spelled as Aviv too - the well known city in Israel called Tel Aviv means “hill of spring.” (“Abib” changed to “Nisan” around the time of the Babylonian exile.)

Thirdly, the stars were used in some civilizations to mark years and specifically knowing when to plant crops. The ancient Greek writer Hesiod would point out times of the year for sowing and harvest by referring to the first visibility of certain stars. Some cultures started their new year on the first day of a particular special star, known as a sidereal year. The ancient Egyptians began their agricultural year based on the first appearance of the brightest star in the sky, Sirius, which the Egyptians called Sothis.

So we have days, months and years but where is the week?

We do read in the book of Genesis that God rested on the 7th day, and Adam and his descendants most probably followed God’s example, because Yahweh had spoken to Adam about it and set the process of a 7-day week for humanity in motion.

Genesis chapters 1 and 2 help us see a little of why God broke down the narrative of creation into 6 days plus a day of rest, i.e. humans needed to follow God’s example. Although, we ought to bear in mind that Moses taught God’s day and our day may differ - "A thousand years in your sight are like a day that has just gone by, or like a watch in the night" (Ps 90:4), but the lesson is still there for us to apply to ourselves - God didn’t command Adam and his descendants to take a day off, the Lord led by example.

Yahweh was someone whom Adam would want to emulate, so the 7-day week was a part of Adam’s life and the 7-day week would also be passed on to the surrounding Mesopotamian people because we know from their writings that they too had a 7-day week.

We can see that Cain and Abel took time off work to present Yahweh with a gift or offering - "In the course of time Cain brought some of the fruits of the soil as an offering to the LORD" (Gen 4:3). The phrase "In the course of time," is a translation of the Hebrew "At the end of days". Barnes' commentary says, "this may denote the end of the week," and a number of other commentarys agree. Adam, Eve, Abel and Cain seem to be using the week to mark time.

The story of Noah also has a number of allusions to 7 days. Furthermore the word “week” is actually mentioned in Genesis 29:27–28 regarding Jacob’s wife Leah completing her bridal week. Leah and Jacob were in northern Mesopotamia at the time. The Hebrew word mentioned in regard to Leah and Jacob’s week is shabua, which means a heptad: a group of 7.

At the other end of the Fertile Crescent we find that the Egyptians did not keep a single day in 7 special, they did not have a 7-day week. The Egyptians split their month up into three decans of 10 days each, which was their 10-day week.

The early Mesopotamians, however, did have a 7-day week, and people have debated why that is so. One school of thought supposes that the Mesopotamians chose 7 days for a week because of the 7 moving celestial bodies we can see with the naked eye: the Sun, Moon, Mars, Mercury, Jupiter, Venus, and Saturn.

We call the days of the week after those names: Sun for Sunday, Moon for Monday, and Saturn for Saturday. Tuesday, Wednesday, Thursday, and Friday have been replaced in English with the Germanic/Norse names: Tiw for Tuesday (Mars), Woden for Wednesday (Mercury), Thor for Thursday (Jupiter), and Freya for Friday (Venus). Tiw was equated with Mars, which is why in French Tuesday is called Mardi and in Spanish it’s called Martes. French and Spanish, plus quite a number of other Romance languages, preserved the Latin names, except for Sunday which was changed to Dominicus meaning the Lord’s Day and Saturday was also changed to Sabado meaning Sabbath.

The Hebrews have no names for the individual days of the week just numbers, except for the Sabbath day: we read, "Now after the Sabbath, toward the dawn of the first day of the week, Mary Magdalene and the other Mary went to see the tomb" (Matt 28:1).

Another viewpoint about the week is that a lunar month can be divided up into 4 quarters of 7 days each. Well, almost, but it doesn’t quite work out - four weeks add up to 28 days but a lunar month is 29 days, 12 hours, 44 minutes.

The Bible may offer another explanation why the Mesopotamians had a 7-day week. We know that Yahweh was active in southern Mesopotamia because he brought water to the area and planted a garden. He explained to the man in charge of the garden that he had created the universe in 6 days and rested on the 7th day. The man and his children, to whom Yahweh imparted this information, were held in high esteem in Mesopotamia because of their long lives. From this we understand that the Mesopotamians learned of the 7-day week through Adam and his offspring.

God spoke to the hearts of all early humans, but they had begun to go their own way, as we are told in Ecclesiastes 7:29, “God created mankind upright, but they have gone in search of many schemes.” So God highlighted his message to us through Adam and his offspring, the 7-day week being a small part of that message. God also wrote of the importance of the indivisible number 7 in the skies with the 7 moving celestial spheres. Psalm 19:1–4 explains that the night-time sky has a voice:

“The heavens declare the glory of God;

the skies proclaim the work of his hands.

Day after day they pour forth speech;

night after night they display knowledge.

There is no speech or language where their voice is not heard.

Their voice goes out into all the earth, their words to the ends of the world.”

Adam’s son Seth is reputed by Josephus to have been a fine astronomer and so he would have noted the 7 wandering celestial bodies. Names were given to these travelling lights in the sky and a temptation arose for subsequent generations to think of these physical spheres as gods, or as representing celestial beings. The Bible explains that though men may have gods ruling their lives there is only one true God. Even today people will try to “read the stars,” and horoscopes are written that are thought to rule over certain aspects of people’s lives.

Perhaps, the fact that God specifically commanded a 7th day of rest to the group of people leaving Egypt, means that both the 7-day week and the 7th day of rest had been lost to the Israelites during their tenure in Egypt and it needed to be reinstated. So, God wrote it in stone—something we may have happen in our own lives from time to time: we fail to do what is correct concerning a certain issue, so God gives us a reminder that we will never forget.

We first hear about a day of rest in Genesis 2:3, but the trail for the Sabbath day thereafter seems to go cold. The liberated Israelites were told to “Remember the Sabbath day,” as if somewhere along the line "a day of rest" had been lost and they needed to remember it and start applying it to their lives once more. In the story of the exodus we can see God looking for an opportunity to reinstate the 7-day week, and finding one - "Then the Lord said to Moses, 'I will rain down bread from heaven for you. The people are to go out each day and gather enough for that day. In this way I will test them and see whether they will follow my instructions. On the sixth day they are to prepare what they bring in, and that is to be twice as much as they gather on the other days'” (Exod 16:4-5). "He said to them, 'This is what the Lord commanded: "Tomorrow is to be a day of sabbath rest"'" (Exod 16:23).

Employers ought to give their employees a day off. We can’t keep on working one day after the other without a break - “You have six days each week for your ordinary work, but on the seventh day you must stop working. This gives your ox and your donkey a chance to rest. It also allows your slaves and the foreigners living among you to be refreshed" (Exod 23:12).

So we see that the 7 day week is implicit in the Bible.