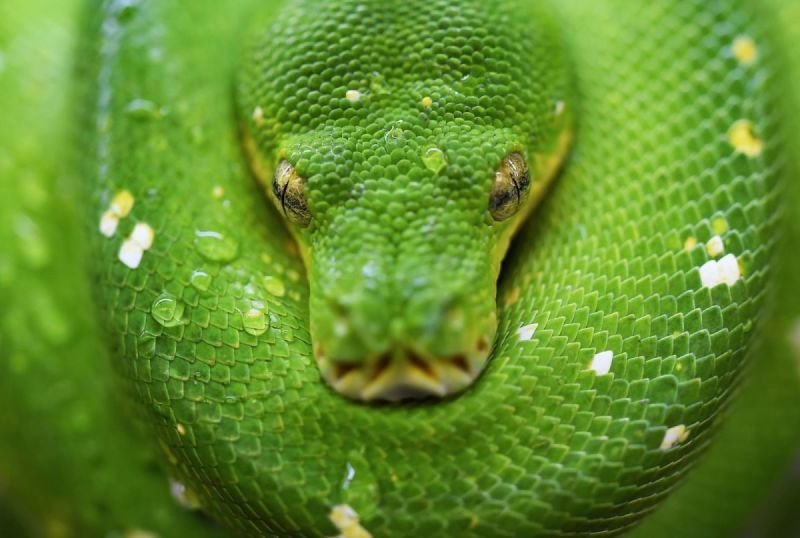 Question: How can snakes talk?

Answer:  This question is addressed in the book "Genesis for Ordinary People."

However, we can say here that the garden of Eden scenario ought to be read with a discerning mind. Adam named the living creatures that were in his vicinity.

The Hebrew word used for “creature” is “nephesh,” which means “soul,” or “living being,” or “life,” or “self,” or “person.” Therefore the naming of the creatures could include creatures who have spirit attached to them, such as angels who were on earth at that time. After all, the serpent that Genesis talks about, is an animal but we also understand that this particular creature was a guardian cherub too, but Adam named him "serpent" because that name depicted his personality.

Figurines have been found in southern Mesopotamia that have humanoid bodies and reptilian heads. (A quick internet search will show you photos of them. Search for “Ubaid Figurines”.) As Bible students we ought not to be quick to dismiss these figurines. The local Ubaid people in 5000 BC had their own way of relating their story of the serpent. Ningishzida was a guardian. His name in Sumerian is translated as “lord of the good tree”. Ningishzida is depicted as a serpent - He was sometimes depicted as a serpent with a human head. In 2 Kings 18:4 we read that Hezekiah broke up the bronze serpent that Moses had made, because the people of Israel had been offering sacrifices to it. They called the bronze serpent Nehushtan.

Furthermore, we read (just after the creatures were named by Adam) “for Adam, no suitable helper was found”. That statement informs us that Adam was looking out for a spouse. He wasn’t looking for a mate among eagles, cows or snakes, we see something further. Archaeology has informed us that once water came to the southern Mesopotamian area, people quickly followed - about 5500 BC. The first society to settle in the area was people who shared a common way of life, known as the Ubaid Culture.

If Adam was going to live until he was 930 years old he needed a wife who would also live that long. If Adam married one of the local Ubaidian women he would have to marry about 11 times, presuming the Ubaidian women lived to be an average of 75 years old, none of whom would be suitable helpers for Adam.

God had a plan and allows us to see how the line to Christ began in a special way by Eve being created from the same DNA as Adam.

The Lord God took on the responsibility of Adam’s education and started to teach him.

"Out of the ground the Lord God formed every beast of the field and every bird of the sky, and brought them to the man to see what he would call them; and whatever the man called a living creature, that was its name" (Gen 2:19).

Adam’s lessons in zoology could have taken many days and years to complete, similarly to the education of young people these days, but with the added aspect of Adam being a slow learner because of his extended childhood.

Adam showed a talent for understanding an animal’s nature and naming it accordingly. A name in the Hebrew language expresses the essence and nature of its owner. For this reason naming the animals was no easy task and would require studying a creature’s habits, demeanor, and appearance and then applying a suitable name.

A student given an assignment of naming animals would probably need to use a one-animal-at-a-time method, where each animal may have been studied and watched for considerably long periods, which would give Adam the time to know and understand the nature, reproductive behavior, and instincts of any given creature.

Adam’s education would be higher than current university and college courses, even though we have some fine and knowledgeable lecturers and teachers. Adam was being taught by someone who had a keen interest in the biological life of planet earth because he was, after all, the architect and producer of all such life.

The name of an eagle comes from the Hebrew root meaning “to lacerate” or “one who lacerates.” The talons on an eagle are razor-sharp; their   beak is also sharp and is used for killing their prey. Adam would have taken time to analyze the behavior of a creature and the researching of a particular animal was a part of his education.

We sometimes get the picture that the naming of the animals happened quickly and that Adam came up with names in a quick impromptu off-the-cuff manner, but that would not have been the case.

Forethought and ingenuity went into this responsibility. Each animal could have taken weeks or months to study and would be used as a school lesson by his wise teacher.

Adam would have studied another bird of prey—the cormorant, of which the Hebrew word is shalak, meaning “plunging” or “darting down.” This family of birds are fish-eaters, catching their prey by their excellent diving technique. Once underwater they propel themselves with their feet and wings; some cormorant species have been found to dive as deep as 45 meters. The names of other animals are categorized by the same method. The biblical word for bat implies “flying in the dark.” From a jackal or fox we get the meaning of “burrow.” The dog “yelps” and the bear is “slow.” Lion conveys a sense of “violence” and the name can also mean “to pierce.” The leopard’s name gives us “to spot or stain as if by dripping.” We even see a sense of humor in the leopard’s name.

So in naming the "serpent" we see that the name is important for the characteristics of the being who has that name.

"And I saw an angel coming down out of heaven, having the key to the Abyss and holding in his hand a great chain. He seized the dragon, that ancient serpent, who is the devil, or Satan, and bound him for a thousand years. He threw him into the Abyss, and locked and sealed it over him, to keep him from deceiving the nations anymore until the thousand years were ended" (Rev 20:1-3).