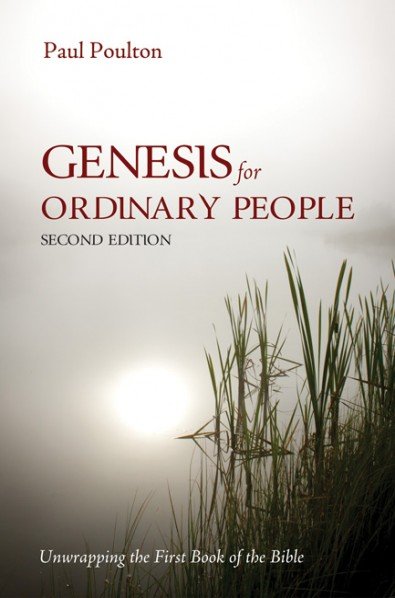 This commentary has an interesting take on blending scientific knowledge with a relatively literal approach to the text. Poulton’s unique approach is harder to place on the literal-mythical spectrum. Generally, he takes the text very seriously as it stands (including people’s long ages and Eve’s supernatural creation).

He tends towards the literal so much that he ponders about God physically walking in the garden, to the extent of wondering how loud his footsteps were; whether he told Adam poetically about creation using the days of the week; and whether he would sing, and Adam pass the songs down the family as far as David.

He writes (p.155) “I don’t think we should view it as strange that God should walk on the Earth he created... We are made in his image, which means that God was able to be manifest in the same form as us... image means optical, it is something we see.”

Yet Poulton distances himself from fundamentalists, and concurs with the scientifically accepted age of the Earth. He is keen to incorporate geological, biological and historical discoveries, placing our knowledge of DNA into his exposition of the text. His second chapter is all about the synchronisation of science and scripture.

Neither is he afraid to deal with the similarities between Ancient Near Eastern texts and Old Testament scripture – but I’d like to have seen him make more of how and why they differ, as that sheds vital light on the writer's understanding of God (if you understand Genesis to have been written in the Babylonian exile, although Poulton runs with Moses as the author).

This mid-spectrum approach means that, while there will be assertions that people at either end disagree with, there is also a lot to challenge their assumptions.

Having to provide a coherent approach to the developing story, he understands that there would have to have been an established community of humans at the point that God breathed life into Adam, which makes sense, given clues at the end of Genesis 4. He notes the Ancient History Encyclopaedia’s contention that “most probably, Eden in the Genesis narrative is modelled on Eridu,” the well-excavated civilisation established some time before 5,000 BC, watered by canals from the Euphrates.

This is where I find some of his explanations suffering in the tension between the literal and metaphorical: while a naked pre-Fall Adam works easily within the context of a poetical creation story, I am not convinced of it being his literal manner of (non-)dress within an already-established community outside Eden.

Poulton makes much – and possibly too much – of “the seed” planted in Adam to germinate in Christ, asserting (p.51) “The ‘life’ that was deposited in Adam made its way into his offspring too and somehow they received the benefits of it.... They lived long, were strong and were handsomely proportioned with a certain amount of intelligence, which is what we would expect if the creator of the universe had breathed something into their first forefather.”

I do have questions about the premise of this series (“For Ordinary People”) as far as it implies something negative about an academic approach. So we do not get, for example, comments about the dualistic themes that run through Genesis to bring out the brokenness of creation, as might be brought out if considering the literary approach to the text.

But Poulton is a good non-academic choice, who has already earned my respect in his usual role as musician. His work is full of creativity, intelligence and integrity.

He also earns respect for his research here, combining scientific, geographical and historical background to get below the surface of the story. And that is one of his strengths in this book. He does dig as deeply as he can to tell the story with plenty of colour, for example, taking the structure of ancient names and investing them with some purpose and character (“The Sumerians used the prefix ‘En’ to denote a ruler...Seth named his son Enosh and Cain named his son Enoch...” (p.61). Poulton offers that these could have been early kings of Eridu).

He may sometimes add 4 to 4 and suggest it equals 9, but at the very least, Poulton will make any reader think hard and check their own assumptions – a vital attitude, wherever you fit on the literalism-symbolism spectrum.